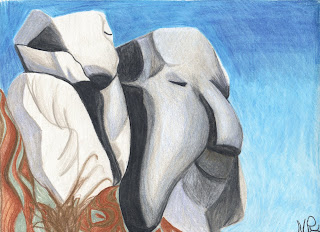 Tunkashila- Great Spirit I call upon your wisdom to guide me and all those who are lost. I ask that you always be a presence and force for good in my life and all those I touch. We honor you Creator and give thanks always and in all ways for your love.

For many years I wandered in the desert.
My magic abilities not yet known to me. 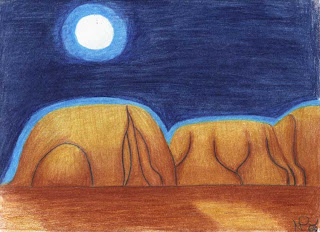 I stopped to drink water from the springs that were too few and too far between.
My feet resting only long enough to stop the throbbing and than continuing to carry me through my self-imposed exile.
I heard the drumbeats in the distance and they frightened me.
I only knew what they taught me- to fear the unknown.
At times during the afternoon when the sun stretched its rays farthest across the sand and rock I would catch glimpses of a figure bending across the orange and gold stripes of the rock face. His long hair rolling down his back and shoulders. 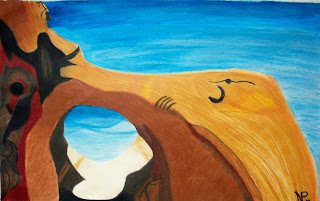 I could hear him calling to me and feel his breath on my face as the wind blew him close to me. The first time I saw this shadow man I had a knowing feeling that this wasn’t the first time we’d encountered each other. I knew he wanted me – to help him come to life. This Spirit - ghost saw my life pumping through my veins and couldn’t resist the heat. Each time like a moth ha came closer to bathe in the light and warmth that radiated from my frightened body. I allowed it, needed to know it, curiosity overwhelmed me. I let him flow through me, over me, in me. He took me by the hand and welcomed me in. He reached into the core of my being and drew me out. He whispered his secrets into my ear and bestowed treasures at my feet. The morning came and just as easily as he had arrived- he vanished.
Was it a dream? Am I really alone? I lay totally exposed a part of me had been awakened and now I was even more lost in my aloneness. I got up and pretended confidence again heading towards the Sun on my journey.
I came to a canyon with sheer deep walls and a raging river below. There was no way across it. I felt frustration and tears well up in me. Not knowing what to do I sat at the edge of the canyon knowing I had to find a way across. Night was coming, coyotes called in the distance, the moon was rising. Than I saw him coming to bask in my warmth yet again. I wanted to resist him but he drew me close, it was too much for me. My heart pounded the blood into 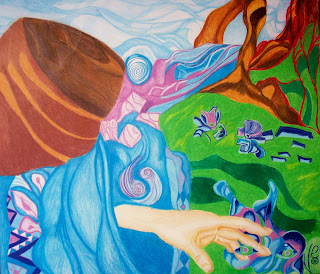 my ears, my whole being trembled in his arms. The remembrance of the night before awoke me to the possibilities of my own inner knowing, my own truth- the possibility of leaving my exile. This knowing and the feeling of joy that followed opened me up to be filled fully with the power and essence of this Spirit man, this shadow. I allowed every drop to pour through me until we had become one. In a daze I felt him leading me by the hand across the great chasm in the desert floor whispering in my ear to take a leap of faith. I had no doubt that I could make it as long as he held my hand. Joined as one we walked in the night until we were stopped by the sheer rock face of a mountain. There a fire was already glowing blue and gold. I heard the drums as we approached and began to tense at the thought of what might come. 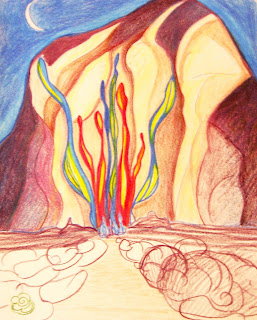 atched as a figure danced in circles, his movements throwing elongated shadows against the rock wall. I stopped, I wouldn’t move, I felt pulled, I resisted. Suddenly I saw two orange feathers at my feet. I knew this was a warning, someone was trying to help me, send me a message, but I didn’t know what it meant. The pulling became stronger and more forceful, I tried to resist but felt my heals dragging through the sand as I got closer to the figure and dangerously closer to the fire. I gave up resisting, it wasn’t doing any good. I felt myself thrown directly into the violent blue flames of the fire. I felt the separation, the loss- than I knew why I had received the warning, that I hadn’t listened too. I allowed myself to become the fire. The Spirit man laughed and danced as he used my flames as a source of heat. He circled around and around as I burned in the fire. 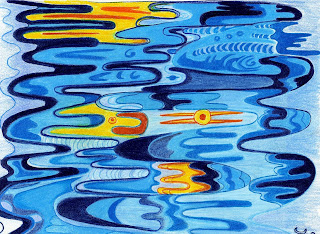 For hours he danced until finally the dancing stopped and the drumbeats quieted. The Sun began its slow descent into the gray morning sky. All of a sudden I felt a drop of rain pop and sizzle as it landed on my burnt flesh. Than another drop, than another until the sky was filled with clouds and the torrents of rain washed down the cliff walls to gather into small pools around my calves and arms. Cooling me and washing away the soot and ash from the fire. I found the strength to raise my body and look around at my surroundings.
In the distance I saw a village. As I walked closer the people of the village recognized me even though I had never seen them before. They called me their healer. They gave me a basket of herbs and white sage as a gift. They patted me on the shoulder hugged me and said they had confidence in me. I didn’t know what they were talking about. I was lead into the room of an old adobe house. There on the bed lay a woman with long white hair. She was dying. She pointed to me and motioned me closer. She reached over to her side, pulled out a fan of Eagle feathers and placed it in my hand. Touching the fan, I felt a shock of bright light, a remembrance of something that stretched out beyond time and space. I looked into the eyes of the grandmother and was shocked to see them so blue and clear, as if they were a reflection of my own eyes. She spoke to me clearly though her lips did not move. “ I have given you your gift back. It is your choice how you use it.” At that moment I saw what I had to do. My gratitude for her gift and the new knowledge I had been given awoke in me something long forgotten. A secret long suppressed. This awareness filled my heart to overflowing, and I began to feel a strong overwhelming desire to step outside.
Leaving the threshold of the house I looked out onto what was once a dry desert wasteland and onto a land bursting forth with green shoots a 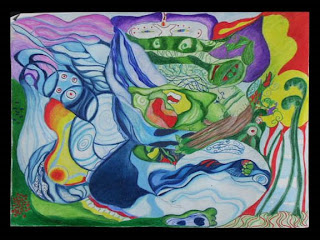 nd flowers of every color. I felt the green shoots as they wound their way around my legs wrapping themselves around and around bursting through my flesh and filling my body. Their healing energy renewing me. I reached up to brush what I though was a strand of hair from my face to find a head full of soft feathers where hair had just been. I watched as my darkly tanned arms burst into wings full of feathers, every color of the rainbow. I gathered up all of my strength and courage, and with my newly bestowed gifts I stretched out my arms to the sky and began my long journey home leaving my exile forever. 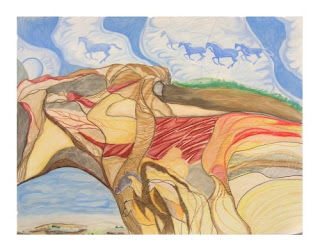 Soaring higher and higher towards home, I noticed two feathers unloosed from behind my ear gently fall towards the Earth. I could barely make out a faint echo of a drumbeating in the distance.
I soared higher and higher I looked to the Earth and saw a shadow stretching across the desert floor and realized
this shadow was my own,
inextricably linked to me.

Blessings to all those who read these writings may your own journeys lead you back home. ~ Aho Mitakuye Oyasin Nicole Plaisted Medicine Woman and Artist
rain dance shamanism spiritual journey

Popular posts from this blog 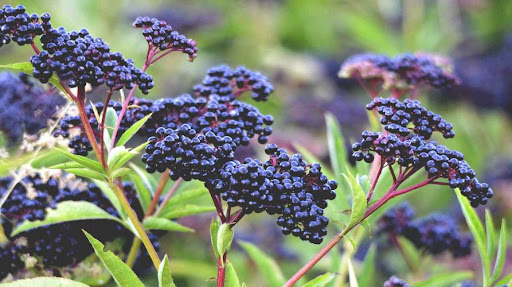 The English Elderberry or    L. Sambucus nigra is a native flowering plant of North America and Europe. It is loved by birds and bees for it's highly nutritious and delicious flowers and fruit. It's purple color is due to its high content of flavonoids which is what will save us all from certain death! I'm sure you've heard of the seasonal warnings to get your flu shot or you're going to die. Not to mention the yearly man-made viruses that are a result of someone not washing their hands before they left the gene-splicing virus making factory. Well currently we've got a serious panic with the new Coronovirus from China. The first case on America soil showed up today in Washington State. Well I'm here to tell you to please not panic and take your elderberry syrup. These articles I've included from PubMed show that elderberry has proven time and again to prevent viral invasion of healthy human cells.  The excerpt below has a number in parenthesis. This
Read more 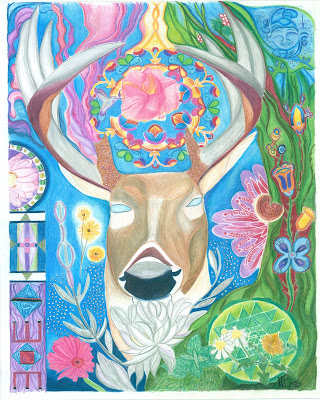 Deer Medicine Deer Medicine works to heal those who are wounded with grace and gentleness. They are not pushy when working with other people. They watch, listen, and guide in a manner that is filled with inner wisdom and light. When working with a deer person you can use flower essences and heart energy because they are high vibration.
Read more